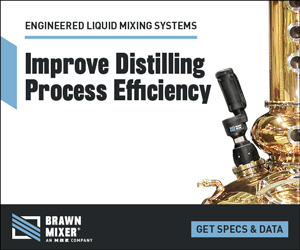 Artisan Spirit Magazine’s “Quarterly Guild Report” is a soapbox for state and provincial distilling guilds to share ideas, encourage success, and disseminate news about what’s going on in their neck of the distilling woods. Here is what they had to say:

The Colorado Distillers Guild held our main meeting of the year October 21 in Breckenridge. We are really excited to be up to 38 DSP members. We had Patrick Maroney, the director of Colorado Liquor Enforcement, and Jeff Lawrence of the Colorado Department of Public Health and Environment both give presentations on ways that we can continue to work with them in a positive way. State senator Owen Hill (R) and state representative Dan Pabon (D) attended and received awards for being our champions on Capitol Hill in Denver. We also had our board elections, and all the standing board members ran unopposed and will be serving another term.The CDG has partnered with Bart Taylor and Company Week/Brewery Week to produce Distillery Week, a weekly newsletter highlighting our members and industry partners. It will be a great way to showcase our member DSPs, raise money for the Guild, and help build key partnershipsCheers,

In its infancy, the Connecticut Spirits Trail recently launched our website ctspiritstrail.com and Facebook page “CT Spirits Trail.”The Trail was officially unveiled to the public at New England’s state fair — called the Big E (Eastern States Exposition). Hundreds of thousands of visitors to the Connecticut House at the fair saw our brochure for the first time. There we partnered with CT’s state tourism board and a craft beer tent to show off our map.The state has begun to excitedly embrace our efforts and we expect to receive statewide promotion from the state’s tourism website, local daily newspaper coverage, and industry publications. We will also be included in a local transportation company’s tour bus stops, which will include both CT beer trail and spirits trail members’ locations.We look forward to our first November/December as trail colleagues, and we will take part in holiday-related events across our great state.From the CT Spirits Guild perspective, we will begin to work with the CT Small Brands Council, which collaborates with all aspects of our three-tiered system.Within those efforts, we will consider how state laws can be modified to let us be competitive in terms of our tasting room offerings (currently we can only provide two ounces of our spirits to a visitor, and we can only sell a tour, not a cocktail). We might also like to pursue small amounts of sales at farmers markets.In future quarterly updates, I hope to be able to share more marketing details and legislative advancements here in CT. In the meantime, I hope you all have a great holiday season.Cheers!

Florida continues to make its mark on the craft distilling industry with new distilleries opening monthly. Manifest Distilling opened in downtown Jacksonville and currently offers potato vodka, with gin and rye whiskey on the horizon. Copper Bottom Craft Distillery opened its doors in early October in Holly Hill — making it the first legally-operated distillery in Volusia County since Prohibition. Copper Bottom spirits are handcrafted in small batches using panela, an unrefined pure cane sugar, and they are open to the public for free tours and tastings six days a week. List Distillery in Fort Myers is another recent addition to Florida’s distilling scene. List focuses on local agriculture and will offer a variety of spirits including hazelnut liqueur, white rum, dark rum, vodka, gin, spiced rum, and coconut rum.The Sunshine State garnered some impressive national attention when St. Augustine Distillery was named Best Craft Gin Distillery in the United States and Wicked Dolphin in Cape Coral was named Best Craft Rum Distillery in USA Today’s 10Best Readers’ Choice contest.Looking ahead, distillers will continue to work with state legislators for upcoming law changes in 2017. “Florida craft distillers seek laws that will put our state on a level playing field with Florida wineries and breweries and other states that enjoy favorable laws like Colorado and New York,” explained Lissa McLaughlin, president of Florida Craft Distillers Guild. “Here’s to a new and exciting year in distilling!”

Faced with a severe budget shortfall the New Mexico legislature met in special session in October 2016, and on the eve of the session a neo-Prohibitionist proposed a 25-cent "Drink Tax" which purported to help balance the state budget, fund alcohol abuse treatment and curb excessive drinking. If implemented, this excise tax would have added over $5 to the bottle cost of spirits, which are already taxed by the state at $1.60/liter. Fortunately this ill conceived plan did not gain any traction; however, with the regular 60-day legislative session scheduled to begin in January 2017, and the state still in financial crisis, the New Mexico Distillers Guild held a summit with the heads of the state brewers guild and winegrowers association to strategize on lobbying and legislative initiatives. The New Mexico Craft Beverage Association was formed to advocate for our common interests much like our individual guilds, and the NMDG hopes to enlist allied support for parity initiatives such as state excise tax reduction and retail reciprocity in the coming session.

After over a year and a half of design, data collection, and cooperation with Empire State Development and New York advertising agencies, the New York State Distillers Guild is proud to be launching its new consumer-focused distillery trail website. The new website will be dedicated to enhancing the craft spirit awareness and tourism of NYS Distillers Guild member distilleries.The online distillery trail divides the state up into six regions: Capital/Northern, Central, Finger Lakes, Hudson Valley, Western New York, and Metro NYC. Each region has its own distillery trail based on the member distilleries in that region. The website also has a filter program that can direct you to a distillery based on spirit types they produce and if the distillery has a tasting room or bar/restaurant on-site.As 2017 approaches, we prepare for a legislative session already poised with changes and victories. The Class D Farm Distiller License will be strengthened with the added privilege of selling all NYS-produced alcoholic beverage types for on-premise consumption by the glass. We also expect the A1 license class to be allowed to sell its own products by the bottle and conduct tastings at their facility without an added permit or license.This January the NYS Distillers Guild will host our fourth annual two-day conference at the Carey Institute outside of Albany, NY. The meeting will start mid-day on Tuesday, January 17th and conclude on the afternoon of the 18th. This conference is critical to our agenda for the next calendar year, having a safe and healthy forum for membership needs and opinions, and building the community to which we all belong. The conference is open to all of our member distilleries and associate member organizations.Check out the new website or drop us a line at nydistilled.com.Cheers!

The Distillers Association of North Carolina (DANC) was delighted when the governor declared October “North Carolina Spirits Month,” adding further legitimacy and respect to an industry that sometimes struggles for recognition while laboring under the complexities of North Carolina’s stringent alcohol laws.October was also the first anniversary of the passage of the North Carolina Distillery Sales Bill, which allows NC distillers to sell one bottle per customer per year. By all accounts it was a seminal moment in the history of North Carolina alcohol history. North Carolina hadn’t seen a legal bottle sold outside the ABC system since 1909, because NC’s prohibition started earlier than the national prohibition.The full impact of the bill is awaiting more stringent collection of data, however it is clear to all involved that NC spirits sales volume has increased at ABC stores, while distilleries also sell an impressive volume in their distilleries. The number of distilleries in NC has now risen to over 70, with many proprietors saying that they were waiting for the bill to pass before making the investment to open their distillery. Existing operators say the bill had a tremendous impact on their operations and resulted in more jobs and more investment in their facilities.As our members deal with the increased operational pace of the fourth quarter, DANC is eagerly awaiting next year’s legislative session so it can build off of existing momentum and create an even stronger distilling industry.

The Oregon Distillers Guild has been busy over the last few months. ODG general membership approved a complete replacement of our bylaws. Though the initial ones served the guild well, updates were needed and an entire replacement made more sense. With this change, the Board will now be structured in zones to ensure statewide representation. In addition, a tiered dues structure will be created starting in 2017. Many other changes were included with this adaption and will help improve board functions and expand the guild membership. Also, TOAST 2017 (ODG-sponsored spirits event) has been scheduled for February 18, 2017. This will include a vendor fair for attendees held prior to the start of the event. This gives our sponsors the ability to communicate directly to our membership in a personal setting. Details can be found at oregondistillerytrail.com.

For info, please contact Scott Blackwell at scott@highwiredistilling.com or David Raad at dr@sixandtwentydistillery.com.

The Washington Distillers Guild is electing new board members in November to begin their term in December. All seven positions are up for election, as current bylaws only allow one-year terms. The current board is proposing that the bylaws be amended beginning with this election to phase all officer positions to a two-year term.Three bills are being drafted for the next legislative session. They are:

Three strategic initiatives have been launched:

The new board will inherit all three of these initiatives and will prioritize them as they see best serves WA distillers.

The Wisconsin Distillers Guild was founded in 2014 to amplify the energy of the state’s modern distilling industry. Members join together to promote the production of high quality spirits in Wisconsin, utilization of local ingredients, recognition of the Wisconsin distilling industry, and advocate for more favorable federal and state regulations. The Guild welcomes licensed distilleries as full members, and offers an associate membership for supporting businesses looking to network with our members. The Guild also offers an enthusiast membership level for individuals with a strong interest in handcrafted spirits. The Guild’s website provides resources to member distilleries, people interested in opening new distilleries in Wisconsin, and vendors and service providers for distilleries. As distillers, we have common needs, goals and challenges. The Guild, through this site, provides advice and inspiration for people interested in our craft. Members gain access to the members-only portion of the website which hosts classifieds, forums, and critical updates about laws and regulations affecting Wisconsin distilleries. Please join the Wisconsin Distillers Guild for the Third Annual Meeting at the Kalahari Resort and Convention Center in Wisconsin Dells on Sunday January 22, 2017, 1:00 – 4:00 PM. This is a great opportunity to meet with other leaders in the distilling industry, discuss topics that impact our businesses, and set priorities for the upcoming year.

Is your state guild missing?

Don’t miss out on this opportunity to reach a national audience of craft distillers and suppliers! Share your latest victories, recruit supporters, request suggestions to solve your latest challenges, and inspire fellow guilds. Email brian@artisanspiritmag.com to get involved!